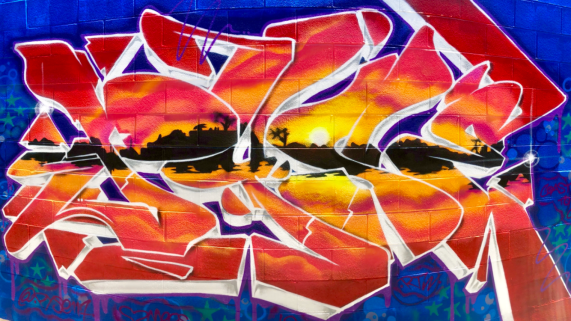 The central coast of California is one of the most dramatically beautiful places I’ve ever been. The majestic, often purple-tinged Santa Cruz mountains drop off in cliffsides and ravines to the mighty Pacific. I took a moment of respite and reverie from painting this Spring, so that I could focus again on photography and capturing some of the pastel-painted vistas that take the sky over Westcliff nearly every night. A small series of twilight coastal silhouettes came into focus over the course of six weeks. I presented them in amber tones that brought the natural reds and oranges to the forefront of the color-composition, and then hemmed them in with heavy vignette. I spent some time memorizing my favorite of the series, I thought it’d make a killer fill-in to celebrate summer solstice. 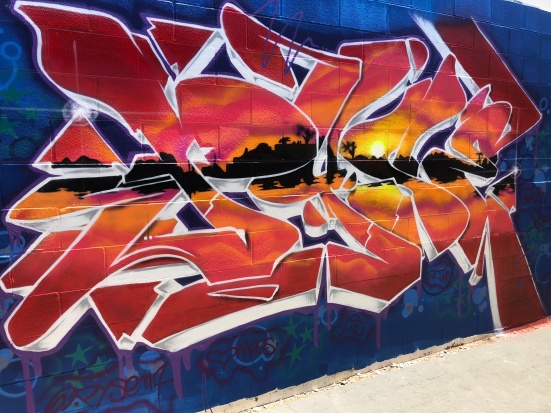 My new friend Ramona runs a great shop over at 1047 Water St. in Santa Cruz. Every time I go over there, the waiting-chairs are all occupied and there are folks killing time in the sunshine by the door, waiting for a cut. The interior of the shop has a unique style, with checkered-linoleum floors and taxidermized deer-heads adorning the walls. The whole place has a classic fifties vibe, from the pearl-handle straight-razors to the hotrods parked out back. The exterior wall deserved a Cadillac-smooth flow coupled with an endless-summer air-brush style of the kind you see on custom rides. This piece was painted freehand in six hours with low-pressure matte-finish aerosols, except for the gloss dark-red Rusto that came in handy when I had some gasket-issues in the Cali heat– no stencils, no tape, no tricks, no projector, no worries! 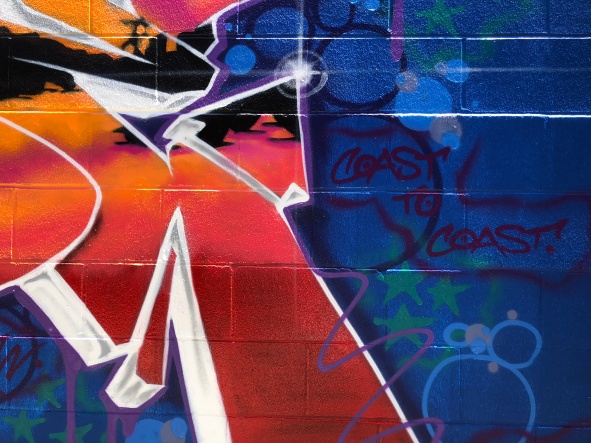 Every winter I have the privilege of making a pilgrimage to norcal where this spot lays in the cut. The homie Pride sharpens up his scissor-style letters while I grind through a grey-scale study. I’m digging the pink pixels that drift off of his piece like a de-frag file. The vato is studying video-game design in Silicon Valley, and the hours upon hours of relentless gaming are beginning to imprint his artistic vision… 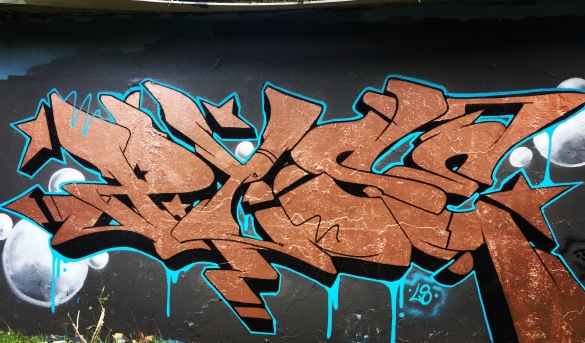 Meanwhile, I’m back to New England meat-and-potatoes for this frill-free copper-chrome burner with a high-pressure fill-in. I like my outlines super-skinny with minimal cutbacks and most writers will tell you that metallics are unforgiving when it comes to flashing after a fix-up. The white orbs provide some depth (I hope), and the weather-worn and paint-peeled texture of the wall comes to the forefront bathed in a chrome-coat.

My portraiture is an exploration of speed and economy. This bella was bombed in three hours with four colors (Black, White, and two Greys). I paint directly from high-contrast photographic reference; I don’t sketch; I don’t grid. Next week I’ll be bringing my portraiture and letter-painting skills to Bill’s Wheels Skateshop in Santa Cruz, California. STAY TUNED!!… 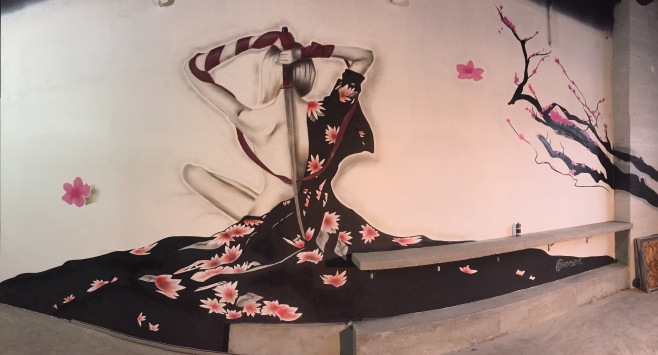 This December I had the pleasure of meeting south-London’s own Tim Haigh, a restaurateur and chef operating in the Salem area, north of Boston, Massachusetts. Tim and his partner Larry Leibowitz were busy cooking up a hot new urban aesthetic for their second venture in downtown Salem. “Bambolina” Pizzeria is Haigh’s first effort in the area, a popular spot inspired by brick-oven-fired counterparts in BK, NYC. His new project, “Kokeshi” is a Bronx to Bambolina’s Brooklyn–a harder post-industrial edge featuring brushed-steel structures and chrome-burner graffiti-letters.

In early December, Tim and I discussed his vision for Kokeshi’s entryway on the Central St. side–a set of transparent glass exterior doors opening into a long corridor with a host’s station at the end. We settled on a matching set of silver-chrome-and-deep-blue pieces, playfully incorporating the Ramen-noodle dishes that will be Kokeshi’s fare. The color pallet in question is inspired by classic Japanese combinations of bright red, black, yellow, and deep-green. The shimmering texture of Belton’s “Chrome-Effects” paint is beset by a Matte-black background that gives way to a Gloss-blue midnight-sky-scape, splattered stars, and full-moon hanging from the fourteen-foot ceiling. 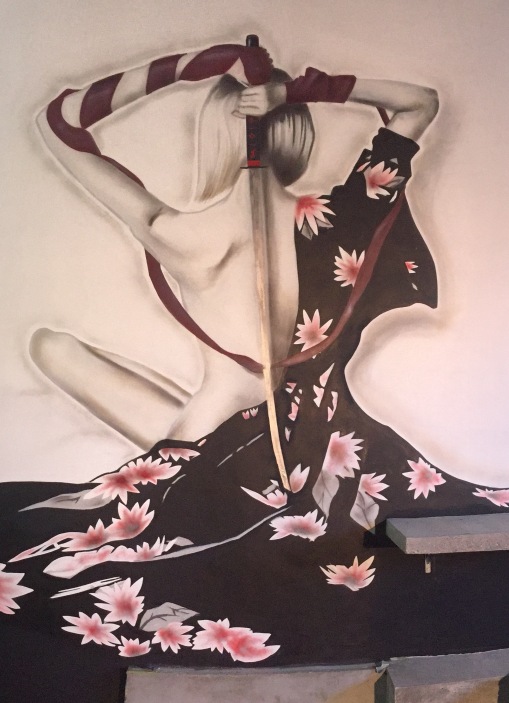 Come Christmas time, Tim and Larry were developing the dining-area of Kokeshi. They were looking for a showpiece to display upon a massive interior wall that rises up to the dining-room’s eighteen-foot industrial-finish ceilings. The pair had initially envisioned a male Samurai covered in traditional Japanese tattoos for this space, but when I began researching references for their concept, I came upon a photograph of a beautiful woman holding a Katana blade behind her back and wearing a flowing black-and-floral kimono. We all agreed that she would be an elegantly-stated centerpiece for the dining-room and so I set about rendering her in free-hand low-pressure aerosol paint. Although I’m in the habit of using spray-paint exclusively, I employed mixed-media for this piece, using a stiff one-inch sash-brush and flat white paint to achieve the white flower-petals of the kimono and to cut-back against the pink cherry-blossoms… 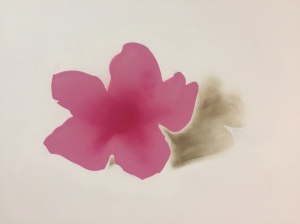 The cherry-blossom tree was achieved primarily with free-hand Belton Premium “Deep-Black” and “Mad-C Psycho Pink”. I tried to execute this part of the mural in a minimalist style, showing gesture-of-hand in the line-work with very little cut-back or post-facto modification. Semi-transparent paints are employed in the shadow-effect beneath the blossoms and in some of the shading in the woman’s figure. Silver-chrome aerosol paint was applied free-hand to achieve the blade of the Katana; the red Japanese letters and the detail in the sword’s hilt were painted with a half-inch flat-tipped brush. Ninety percent of the time, the painting process was beset by the calculated chaos of pipe-cutting saws, plasma cutters, and HVAC teams running pipes overhead. I strapped-on a set of headphones and a respirator, struggling to keep a steady hand amid a staccato of screaming saw-blades and passing clouds of steel-vapor. 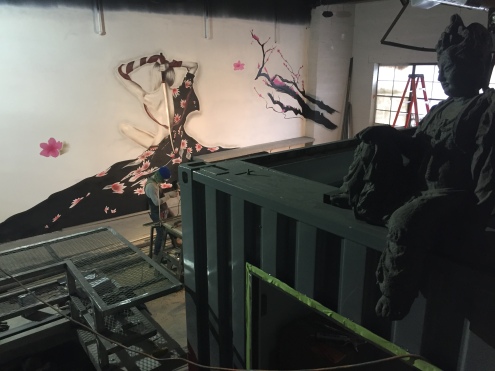 Kokeshi’s ambiance integrates larger-than-life mural work with the custom steel-fabrication of North Shore native metal-worker Scott Lanes who first caught my eye while parking his 1968 Plymouth Satellite outside the restaurant. The car has a bowling-trophy figurine welded-on as a hood-ornament; the man envisioned grand free-standing brushed-steel-and-grating structures that include a cooking station inside a corrugated storage-container. The result is a truly unique dining environment that offers its patrons a transporting experience in the heart of downtown Salem. Kokeshi opens this week (3/7/17) at 41 Lafayette St. If you’d like to learn more about Kokeshi or read an additional interview with yours truly, please check out Creative Salem’s new write-up by Joey Phoenix here:

…Or take a look at this beautifully photographed feature by Rachel Blumenthal in Boston’s chapter of national dining authority Eater:

Regretfully, I can’t be there for the grand opening but I’ll be stopping in for a bowl of delicious big-bowl Ramen when I return from California this May to take on a new season of mural painting on the North Shore! Cheers!

Check out Gloucester native Adam Cooney aka Stimulus spitting some fire in front of my showpiece mural from last fall in Fishtown!!:

Welcome back to hockey season. Tighten up your laces when you skate with Boston writers, we came up painting in blizzards with Rusto metallics and all-weather chrome-killer bitumen-black. Guys out here are no strangers to a scrap either–styles are so smooth and fluent you won’t even notice the gloves as they drop to the ice.

I’m rocking this season-opener under the self-proclaimed moniker “Master of Sleaze”. To earn that title, it takes ten-thousand hours of sloshing in the streets with fresh paint, bad tattoos, and bottom-shelf whiskey.  Open up a can of oil-borne undercoating out here for a mid-February get-up; find out the sleaze is so thick it’ll break off your stir-stick.

Old Tyme Graffiti up here in the Bean–board-bangin’ slap-shots and body-checks. See you in the post-season, hoss. 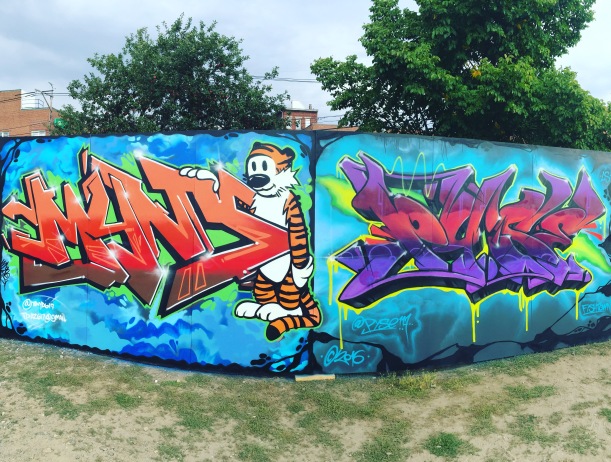 I was honored to return to Gloucester’s second annual Harvest Moon Music and Arts festival this September 2016. Gloucester sweetheart Carol Pallazolla put on another killer show featuring varied musical styles from zydeco to Zeppelin. This year I invited Roslindale talent Mynd to join me in painting a live mural during the festival in front of a crowd of a couple hundred people. Mynd is a gentleman graffiti-writer who once managed the famous graffiti/hip-hop supply outlet “Kulturez Dynasty” in Harvard Square’s Garage Mall. 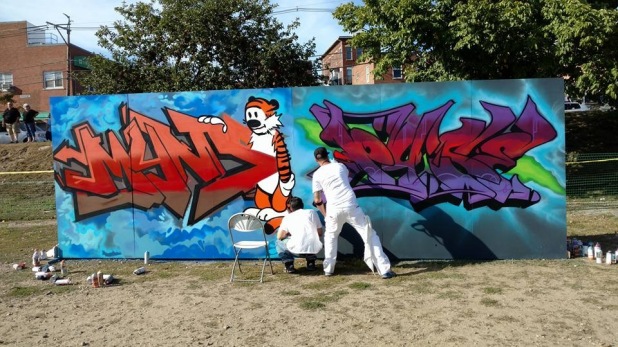 The 2016 Harvest Moon line-up included local singer-songwriter Alan Estes, folk-rockers Liz Frame and the Kickers, Henry Allen, San Francisco’s Led-Zeppelin-Tribute-act “Lez Zeppelin”, and was headlined by the absolutely electric Daniella Cotton from New Jersey. The non-stop main-stage rocked the crowd at high amplitude into the late-summer night, kicking out beats and baselines that were audible for blocks from the waterfront. I worked on my piece until the sun set behind a beautiful motif of the Gloucester paint factory, then I relaxed in the vip tent and snacked on organic catering by local chef and former class-mate Ross Franklin. 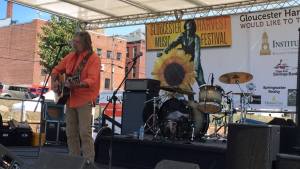 This event was a benefit for Cape Ann’s Addison Gilbert Hospital and was sponsored by Cape Ann Brewing Co. (among others), who poured delicious beers all night that were brewed just a block away at their brew-pub on St. Peter’s Square. The festival also featured a fine assortment of local vendors, artists, and craftsmen who represent the diversity of skillfulness and culture that we have here on the North Shore. 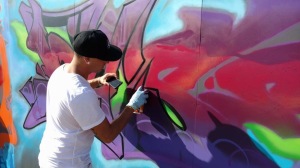 The mural that Mynd and I completed was painted with 100% freehand aerosol paints (no stencils, no tricks). The freestanding wall was built again this year by local master-woodworker Darren Taylor. It’s made of six sheets of 1/4 inch luon plywood. Both the Mynd and Pyse pieces are still available for purchase; they are each composed of three 8’x4′ (vertically standing) panels. Each panel is available individually. Please refer to the contact tab at the top of the page if you are interested in making a purchase.

Special thanks to Carol Pallazolla and Christopher Silva. See you next year!