Danny has been enhancing interior and exterior spaces with his custom murals for a decade and a half. He specializes in bringing the client’s personal taste and culture to the forefront of his designs to create a distinct, beautiful mural. These large works transform mundane, often monochromatic walls into living, energetic spaces; whether you’re looking for an exciting mural for a child’s room, a dynamic advertisement on an urban exterior, or a showpiece to complete a landscaped garden. 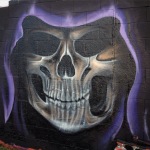 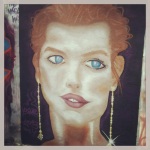 In 2010, Danny painted the “Buddha and the Red Garuda” mural on the Ann Drake House in Gloucester. The painting incorporates Ann’s reverence for Buddhist meditation and her practice of shamanism, represented by a portrait of the Buddha and a mantra painted in Sanskrit letters. Ann’s house has a lush garden space in its front yard, which Danny was able to include in the mural by weaving red painted roses through the letters that extend from a real rose garden on the right.

If the latest hip-hop styles are more your speed, check out his 2010 mural on Will Taylor’s antique freight-car caboose. Will was looking for a way to liven up this stationary piece of railway history that sits on a pair of isolated tracks next to his antique shop in Essex. Now his railcar is adorned by wildstyle lettering that recalls the subway-art heritage of New York City.

Danny’s most recent work has been an exploration of large-scale portraiture rendered in low-pressure grey-scale aerosol paint. These larger-than-life visages adorn walls coast-to-coast, most notably the “Queens of Style” mural at the Greenhouse Studio in Santa Cruz, CA, 2016 and the “Lady Samurai” wall at Kokeshi Restaurant, Salem, MA, 2017. 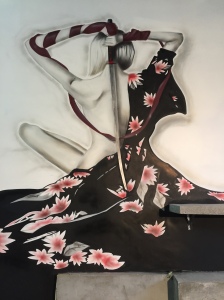 These works are created with the highest quality, most durable aerosol paints available from Spain and Germany to ensure that their composition will endure the tests of weather and time. Whatever kind of vision you may have for your mural project, Danny has the skill-set and the talent to make it a vivid reality.