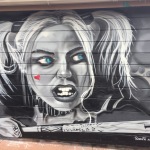 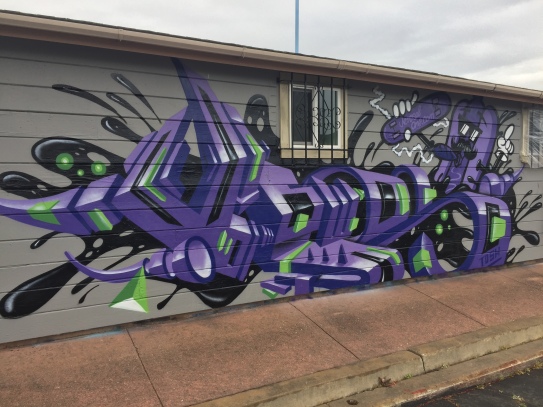 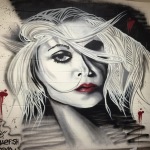 Two years is too long to be without Californian comfort. I’ve just returned to sunny Santa Cruz County a mere hop and skip ahead of Nor-eastern snowfall. After a couple days of shaking off the jet-lag with Peruvian coffee, farm-stand kiwis, and tamales de pollo, I headed over to the West side to christen a private music studio with ancient rites of hieroglyphic glamour. An extensive selection of prescription-strength Montana paint (Spanish and German) is available over-the-counter at Palace Art on Pacific Ave. in downtown Surf City (they even carry the “Mystic” [German] transparent colors that I’m so fond of.) After selecting a seamless greyscale, I met up with hometown homegrown-scientist Dr. Pride at the spot on Mission St. My subject for the evening was a breathless blonde black-and-white photograph; languishing in her good looks; lips gently parted in subconscious suggestion of speech or sex–a duo-chromatic composition that combines graduated shading with fluid gesture. She’s painted in the “Sin City” style of selective embellishment –Montana Whiteline “Hot Lips” Gloss-finish Red is the only color that compliments the frame. This piece was painted in haste in a single evening on white-primed interior cinder-block. Dr. P-Ride adjusts the adjacent wall with a classy California Thrash Kids chaos-piece that boasts six color-schemes in a single bound. The kind and good doctor has a piecing style so technical that it requires full schematics and an undergrad in urban engineering to decipher. Meanwhile, the prevailing theme in my life, and my art currently, is simplification: painting in a loose, open-ended style that feels like a sketchbook-page spread-out on the bricks, or getting on a cross-country flight with a backpack and a skateboard; just a couple of things left to say and a cool hand to spray them with. 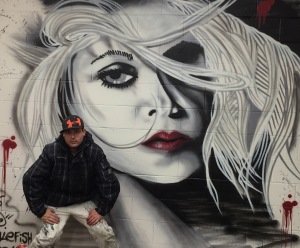